With the return of AMC’s The Walking Dead, this week, here are my much-delayed but eagerly-awaited (or not!) reflections on why the show is terrible, and how it manages to screw up everything that the the comic does right. (Be warned! I will probably end up spoiling stuff.)

[A quick note: This is not to suggest that the comic is perfect, by any means. The prison arc drags and, more recently, characters have a habit of monologue-ing in such a way that I have to think Robert Kirkman is hoping to make some sort of serious social commentary that’s well beyond his ability. But still, it’s much better]

1) The Walking Dead are supposed to be the people, not the zombies

The show’s biggest failing is that it thinks the zombies are the stars. It can’t go an episode without a zombie sneak-attack, and it makes a zombie encounter part of every story. To pull some examples from this season:

In the comic, the zombies have been largely reduced to background pieces that do little to move the plot forward. When they gather en masse, it’s to serve some sort of symbolic purpose.

It’s not that the zombies disappear or are rendered harmless, but nor are they aggressors or malevolent. Rather, the zombies of the comic appear as a consequence of human folly – the wrath of god, a force of nature, a critique of social relations given undead form, or however you choose to explain it. And so there’s a subtle moral element to it, too, at least in the past few years. Not that any particularly person deserves to be attacked by a zombie, mind you, but that we, more generally, have brought this upon our selves – and we’re running out of chances.

A friend of mine defended the story arc in the first half of this season by way of claiming that it was about the difficulty of re-establishing society. Which, if it were true, would’ve been great. Instead, having only just established the prison community in the previous year’s season finale, this year’s season premiere immediately introduced a mystery illness to destroy it. Number of full episodes spent showing that it’s not all about the zombie attacks: 0

By contrast, the comic book spent dozens of issues in the prison and plenty of time showing that inter-personal conflict and power struggles were far more deadly than anything outside the walls. What my friend claimed/hoped the show was doing? That’s what the comic book actually did. If you’re going to make a show about humanity after the apocalypse, it probably behooves you to slow down and establish that they can still interact with other human beings.

3) Choreography that would make a pro wrestler blush

Again, the lazy tropes. There’s a difference between the effective use of horror conventions and the poor use of them. While I expect the disorienting close-up or extreme that shields our view from a surprise, I expect what follows to be an actual surprise. When Hershel stepped slowly past a body in a dark prison corridor, I knew it would bite him. When, in the second season, Lori went after Rick in a car, I was reasonably sure that she would crash. When she held up a map and took her eyes off the road, I knew there would be a zombie in the way when she looked up. And that she would swerve. And that she would crash.

And when, earlier this season, Rick was outside the prison and got pinned against the fence, the camera angle suggested that someone was going to sneak up, unseen, from behind to save him. So, Daryl did just that:

It’s one thing to anticipate a surprise, but to know exactly what that surprise will be? That’s not a surprise at all. It reduces the anticipation to an expectation, and robs the scene of tension or excitement entirely.

4) The physics of sound

When they’re off-screen, the zombies are remarkably quiet. Like, sooo quiet. But when they’re on screen, they’re incredibly noisy – gnashing and moaning and gurgling and growling.

But, you’re saying, it’s just that they’re quiet when there are no humans around – obviously, they get noisy when there’s meat in their presence.

Except, that’s not what I’m saying at all. I literally mean that it’s a matter of whether the camera can see them or not.

In AMC’s version, everyone hates Rick. He’s a reluctant leader who’s largely incapable of making decisions, wracked by self-doubt and guilt. This might be a fine archetype to employ in literary fiction, but in the hands of lesser writers, Rick is simply annoying.

In the first few years of stories, Rick is instead characterized by a survive-at-all-costs ethos, an angry-at-the-world recklessness, and is intensely protective of his family. Just like TV’s Shane. (The comic’s Shane died after only a few issues – killed by Carl, rather than Rick.) And, in the comic, he finds some solace in rejecting his responsibility to others and disappearing for days at a time, setting out alone on his motorcycle like some sort of post-apocalyptic cowboy. Like TV’s Daryl. (The comic has no Daryl.)

6) Didn’t we see all this before? This is what passes for character development? 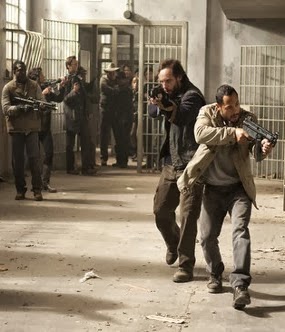 In between, we were given two episodes that demonstrated how a shattered Governor rebuilt himself in order to become the exact same person he had been before, with a more or less identical purpose – he replaced his old community with a new one, regained his leadership role, even managed to find a new daughter. And this all served what point, exactly?

7) How gender influences your chances of surviving a zombie apocalypse

I haven’t fully developed this point in my head, and it deserves a longer, fuller discussion. But regardless, it’s something that needs to be covered. (That I’ve put it number last on my list isn’t an indication of priority. Instead, it’s an indication that it’s the least rigorously formulated.)

One of the interesting tropes in The Walking Dead comic is the clash of male egos and its catastrophic consequences. Shane nearly kills Rick before the first story arc is complete; Rick and Tyreese nearly kill each other; Rick and The Governor destroy one another’s homes; a group of cannibals become a particularly unsubtle metaphor for the direction that this is all heading in. The group’s most brazen and direct actions also tend toward disaster: Shane pulls a gun on Rick and Carl shoots Shane in the neck; Rick’s first confrontation with the Governor is memorable for Rick getting his hand chopped off; Tyreese’s pre-emptive strike against Woodbury results in his capture and execution; Rick’s first encounter with Negan ends with Glenn’s murder. Consciously or not, there is a clear and obvious indictment of hegemonic masculine aggression, ambition, and hubris. But this is also a violent story with characteristically violent consequences, so all of this might seem rather unconvincing and lazy – characters die all time, most of those characters are men, and it’s easy to link any one death to any one man’s reckless actions.

So, let’s try this, instead: apart from the characters who were introduced in the current storyline of the comic, only one man who claimed any kind of leadership role is still alive: Rick.

Now, it’s not like women don’t take risks or don’t die. The comic book version of Carol kills herself. (Carol is the one major exception to the general rule that the comic does everything better. But even though it seems inevitable that she’ll return to the show, the way they wrote her out was awful. And just reinforces the fact that Rick is a dick.) Lori and Judith are killed in the Governor’s attack, which ultimately reduces them to a story function – the cost of Rick’s pride.

[Quick aside, though. The female characters on the TV show? Some great steps have been taken to build them up into strong, independent people. But there’s a reason that half of the early TWD memes relished in point out how annoying they were.]

But Andrea and Michonne have survived capture and physical abuse, and have grown into leadership roles rather than having taken them by force. Necessity plays a role, too: when Gregory gives his allegiance to Negan, a disgusted Maggie effectively takes command of The Hilltop.

And this is hardly an argument for some wildly different form of feminine leadership. Michonne is no less hot-headed and independent in the comic than she is on the TV show, and Andrea is remarkable for her level-headedness and killer instinct. Maggie probably most closely resembles a recognizable feminine trope, having become something of a mother bear to Carol’s daughter.

Rather, it seems to be an argument for leaders who don’t aspire to hold power but earn it and will take it when they must; fighters who don’t seek fights but will fight when they’re backed into a corner. As it happens, these sorts of characters are all women.