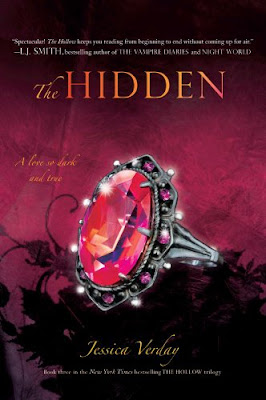 A love that knows no bounds.
Abbey knows that Caspian is her destiny. Theirs is a bond that transcends even death. But as Abbey finally learns the full truth about the dark fate that links her to Caspian and ties them both to the town of Sleepy Hollow, she suddenly has some very hard choices to make. Caspian may be the love of her life, but is that love worth dying for?
Beautifully spun, emotionally gripping, and irresistibly romantic, The Hidden will leave you breathless.

This is the final story in the Hollow Trilogy.  Though I hate to see this series end, it ended with a twist that left me gasping with awe.

Abbey had lost her best friend Kristen because Vincent had thought that she was Caspian’s other half and soon realized that he had killed the wrong girl.  Abbey knows that she is Caspian’s soul mate and that her death is coming very soon.

Vincent is a cruel character.  He has no respect for women.  He is rude and constantly stalks Abbey.  He leaves sickening surprises in her locker at school and even threatens her and her family in her own house.  She can’t even tell her family about him since that would lead up to a bunch of questions about her sanity and she couldn’t reveal that she’s in love with Caspian, a ghost.

We are introduced to a new character named Cyn.  She is assigned to Kristen’s old locker and that is extremely hard for Abbey.  Cyn is a little strange at times.  She keeps pots of dead plants in her locker, in the hopes of talking to them and bringing them back to life.  But, still, Abbey and Cyn become friends.

Abbey and Caspian are an amazing pair.  He is so good to her.  He constantly compliments her, protects her, and leaves her sweet little notes.  Abbey can’t wait till his death day so they can touch again.  She loves having him there with her, but it’s sad that she can’t touch him, hold him, or kiss him.  When his death day arrives, they are able to be there for each other mentally and physically. (This ended up being my favorite part of the entire book!)

I was an emotional wreck during the conclusion.  I had the lump in my throat the entire time just trying not to cry.  I don’t want to give anything away on how it all ends, so I am just gonna say that I think the decision made was the best outcome possible for everyone involved.

So overall, I loved this entire series!   The Hidden was a fast paced, brilliantly written conclusion to one of my favorite series.  There was plenty of action, secrets revealed, and romance.  It’s a story of first love between a human and a sexy ghost and the complications that keep them from being together.  The characters are unique and unforgettable.  The passion is breath-taking and the love is true.  So if you’re ready to attend a Halloween Ball, have a seance with some friends, and find true love with a ghost- this is the book that you have got to pick up next.  I loved the entire journey of Abbey and Caspian and I am sad that it has come to an end.